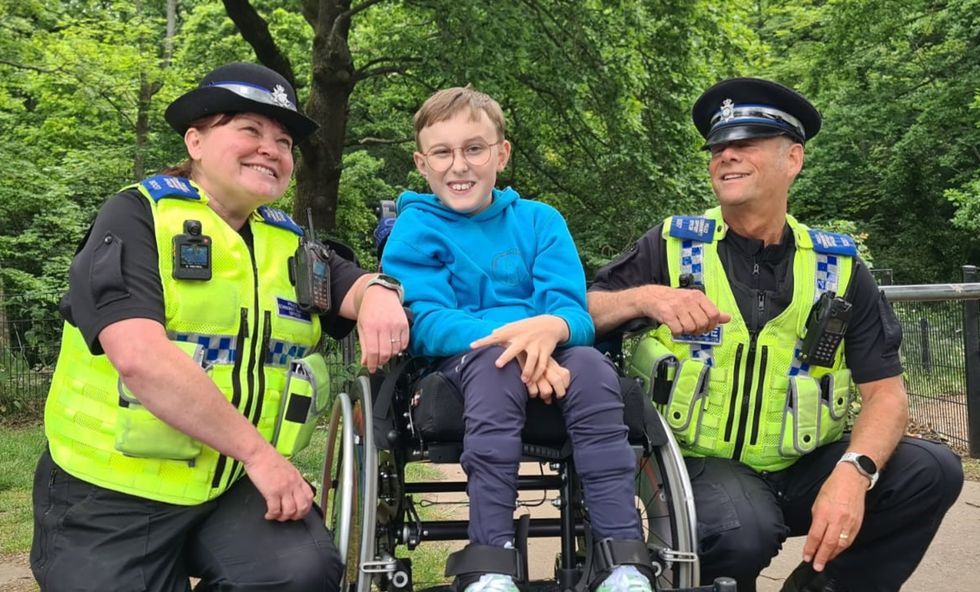 Scores of people helped inspirational young fundraiser Captain Tobias launch his latest campaign to make playgrounds more accessible, by completing a kilometre (0.6 miles) in the wackiest way they can imagine.

Tobias Weller, 11, was joined by a crowd of singing and clapping friends and supporters in Endcliffe Park, Sheffield, on Saturday, with some completing the distance three-legged, one man trying it on his hands and a family passing a balloon between their legs all the way.

Tobias, who has cerebral palsy and autism, has raised more than £158,000 for Paces School, where he is a student, and The Children’s Hospital Charity, in his home city of Sheffield, through a series of epic challenges.

His achievements were recognised at the highest level when he became the youngest person on record to feature in the Honours List when it was announced in December that he is to receive the British Empire Medal.

Now he is trying to raise awareness about the difficulties disabled children have using playgrounds in parks.

At Saturday’s Tobias In The Park event, he was cheered as he completed his kilometre using his trademark walker.

He has challenged everyone to complete their own kilometre in a way they find challenging and people have been joining in around the world.

He said: “It went really well. I managed to complete my kilometre using my walker and my friends and family have done it in lots of different ways today.

“Also, in the last few weeks, a school from Australia and a hockey club from New Zealand have even joined in. That’s amazing, isn’t it?”

Tobias added: “I want to raise awareness and money for accessible parks.

“It’s not right that kids with disabilities can’t access their local parks and I want to change that. I haven’t been able to use the swing.

“If disabled kids are able to use their local playground, it’ll make a huge difference. It means that they can enjoy themselves. Everybody should be able to do that.”

Earlier this week his mother, Ruth Garbutt, said: “It dumbfounds me when children with disabilities are left out and are unable to use playgrounds.

“Tobias is very aware that he used to be able to use the play equipment and now he can’t.

“He adored playing on the swings when he was little and would spend hours on them.

“It saddens him, and therefore me, that he can no longer do this in his local parks.

“Tobias is determined to raise enough money to make a real difference to people’s lives and I admire him so much for this. I think he is amazing.”

Tobias was nicknamed “Captain” after he was inspired by Captain Sir Tom Moore to start raising money during the pandemic lockdowns.

He met his hero when he won the inaugural Captain Sir Tom Moore Young Unsung Hero Award at the 2020 BBC Sports Personality of the Year event.

Tobias’s last challenge involved an Ironman, completed over the course of a year, involving 180km (112 miles) on his trike, a 4km (2.5 miles) swim and running the length of a full marathon.

Last month Tobias was a guest at the first Buckingham Palace garden party since 2019, where he met the Prince of Wales, the Duchess of Cornwall and the Princess Royal.

More information can be found at www.tobiasinthepark.co.uk.