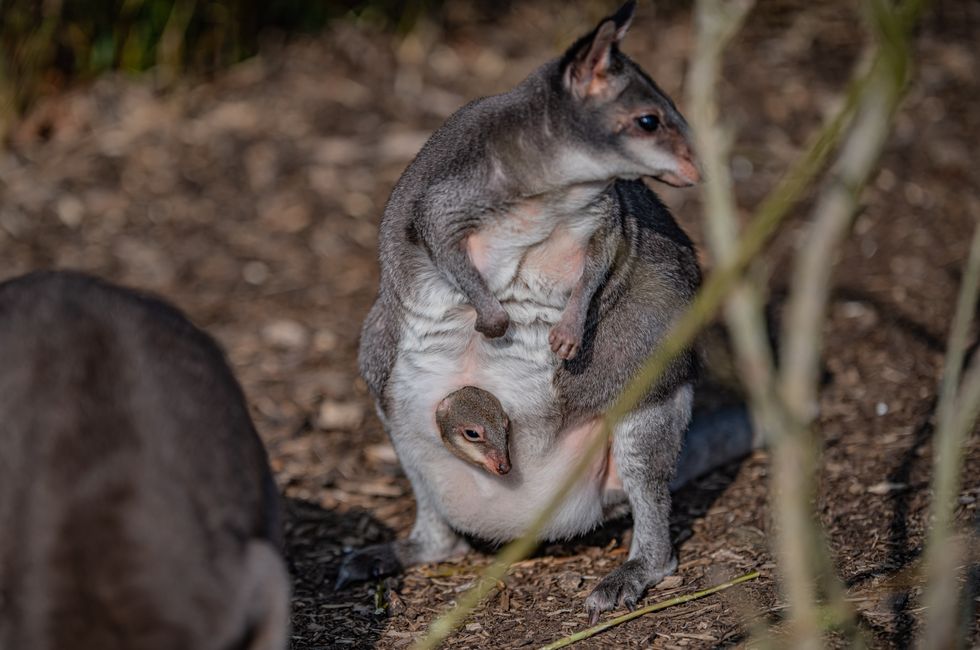 Zookeepers have shared the “magical moment” an endangered baby kangaroo emerged from its mother’s pouch for the first time.

The baby dusky pademelon, born at Chester Zoo in Cheshire, was just the size of a jelly bean when it was born and has been growing inside its mother’s pouch for the last six months.

When fully grown the small marsupial will be around 2ft tall, which has led to the species being given the nickname miniature kangaroo.

“Seeing the magical moment her new arrival took its first peek out of the pouch has brought us a huge amount of joy,” said zookeeper Megan Carpenter.

“When a dusky pademelon joey is first born it’s only about the size of a jelly bean and so it stays in the safety of mum’s pouch, where it receives all of the nourishment it needs to grow and develop.

“It was at the point that we noticed mum, Styx, was slowly gaining weight that we began to monitor her behaviour and feeding patterns extra closely, and we were hopeful that she was rearing a baby.

“It’ll be a few weeks until the new baby fully emerges and is hopping around and exploring all by itself – that’s when we’ll be able to determine if it’s male or female and give it a fitting name.”

The name pademelon is a native Australian term for “small kangaroos of the forest” and the species is nocturnal, meaning pademelons rest during the day and search for food at night.

The decline of dusky pademelons, also referred to as dusky wallabies, has mostly gone under the radar as little is known about the species that is only found in the wild in the forests of New Guinea and some smaller nearby islands in Indonesia.

The population has declined by 30% in the last two decades as a result of trapping, hunting and deforestation to make way for rice farming and logging.

The International Union for Conservation of Nature (IUCN) has officially listed the species as vulnerable to extinction and has recommended close monitoring of the remaining wild population to ensure its long-term survival on New Guinea.

Chester Zoo is currently one of just four zoos in the UK zoo caring for dusky pademelons and only 56 live in zoos across the whole of Europe.

The new information and scientific observations gathered by the zoo will help better inform future conservation action in the wild and bring attention to the highly threatened species.

Please log in or register to upvote this article
AnimalsChester ZooIndonesiaKangaroo